Overview
There's nothing quite like hearing the thrilling timbre of a throbbing exhaust note or feeling the gratifying feedback from a superbly tuned steering system while flying down a twisty road. Few affordable cars offer both these satisfying sensations, but the Chevy Camaro is one of them. It's not focused solely on being loud and going fast, however—even though it does both of those tasks very well. Chevy's two-door pony car comes as a coupe or convertible, and it offers copious features and countless personalization options. While the 650-hp Camaro ZL1 is the most raucous version—and reviewed separately—every model from the base four-cylinder to the V-6 to the V-8 can be enhanced for track duty with the transformational 1LE package. Sure, the interior can feel claustrophobic and has several other quirks, but the 2021 Chevy Camaro is primarily geared towards those who love to drive. Like us.

Chevy improves the 2021 Camaro with some different color options, new features, and wider transmission availability. While Rally Green metallic and Garnet Red Tintcoat have been removed from the paint palette, Wild Cherry Tincoat is now offered—for extra coin. All models now come with wireless Apple CarPlay and Android Auto, which means the app can be streamed to the car's infotainment system without needing to be plugged in. The track-oriented 1LE package is now available with the 10-speed automatic transmission on V-8-powered SS models. Previously, all 1LEs (except for the ZL1 1LE) were offered only with a six-speed manual.

In our humble opinion, the best way to experience any new Camaro is with the optional 1LE Track Performance package. It adds distinct appearance pieces such as black-painted 20-inch wheels and satin-black exterior accents as well as unique interior bits that include microsuede trim and more supportive Recaro front seats (SS models only). However, the most important upgrades are the ones that affect performance. Every 1LE has a dual-mode exhaust system, enhanced powertrain-cooling components, more powerful brakes, a limited-slip differential, and special suspension tuning. While we love that even models with the four-cylinder and V-6 engines offer the 1LE package, we'd choose to pair it with the 1SS trim that only comes with the hearty V-8. That decision would coincide with picking the standard manual transmission, of course.

The base 275-hp four-cylinder isn't slow—we tested a manual model that proved surprisingly quick. But uneven throttle responses and unpleasant, unsporting sounds accompanied its dull demeanor. On the other hand, upgrading to the 335-hp V-6 completely changes the car's character. The gutsy six has its own distinctly searing soundtrack. The Camaro LT1 and SS feature Chevy's iconic small-block V-8, with 455 horsepower and 455 lb-ft of torque. Its tremendous low-end torque, linear power delivery, and chest-compressing acceleration are enhanced by the optional dual-mode exhaust, which erupts with a sharp bark at startup and thunderous sounds during wide-open-throttle blasts. The standard six-speed manual transmission maintains the enthusiast spirit. (For cars not equipped with the 1LE package, the six-speed manual transmission is standard.) An eight-speed automatic is optional with the four-cylinder engine, and the 10-speed automatic can be paired with the V-6 and V-8. The Camaro's astonishing chassis provides a car-and-driver connection (see what we did there?) that's unparalleled among pony cars. Its solid structure engenders precise handling and a quality feel. Its well-balanced ride is firm enough to be agile on curvy roads yet still compliant on rough surfaces. Paired with the 1LE setup, the coupes transcend their class—competing with cars costing much, much more.

Interior, Comfort, and Cargo
The Camaro interior is an improvement versus the previous generation, with better materials and a more modern look. Its comfortable front seats and straightforward layout are high points, but its torturously small back seat and compromised visibility inhibit livability. An optional head-up display is useful and not offered the Dodge Challenger or Ford Mustang. The Camaro also can be equipped with customizable ambient interior lighting, which adds a cool appearance. 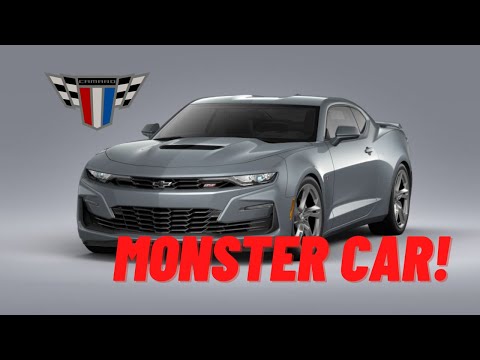 chevrolet camaro 2021 review Starting at: $25,995 Overview There's nothing quite like hearing the thrilling timbre of a throbbing exhaust note or feel...