admin
Geely released the first official images of its new crossover in January. Until today, the SUV was known under the in-house index KX11, and now the brand name for the home market has been announced - Xingyue L (the first word is something like "zenyu"). Recall that this name, but without the L prefix, in the Celestial Empire is also the Geely cross-coupe, which we renamed Tugella. Both cars are built on the CMA (Compact Modular Architecture) "cart", created by the Chinese together with Volvo (the Swedish brand belongs to the "celestial" auto giant), the same platform is at the heart of the Geely Preface sedan, most of the Lynk & Co brand cars (a joint project of Geely and Volvo) and the Volvo XC40 SUV.
As conceived by marketers, the prefix L stands for Larger ("more"), Luxury ("luxury") and Liberate ("free"). Why Geely did not assign a new name to the cross is not entirely clear, because it has its own design, and the coupe did not show a record result at home: in 2020, 25,339 units were sold. For comparison, the coupe-like SUV Mazda CX-4 last year in China found almost 49,000 owners, and the related Geely Xingyue / Tugella cross-coupe Lynk & Co 05 sold 32,502 copies.
Be that as it may, the Xingyue L will be presented live at the Shanghai Motor Show, which will be held in April. And before the premiere, the company shared new photos. By the way, Geely demonstrated the interior of an SUV for the first time, before that we only saw it in a spy photo.

The main "chip" inside is the "scoreboard" stretched over almost the entire width of the front panel. Thanks to the paparazzi's catch, we know that two screens were installed under a single glass, that is, the passenger has his own touchscreen. In total, the Geely Xingyue L has three displays - one more is in front of the driver. Other features of the cabin are a truncated steering wheel, a neat row of buttons under the central air vents and an air duct literally cut out in the same "panel" on the passenger side.
Geely itself has not yet disclosed the characteristics of the new SUV, but the main inputs are already there, they were "leaked" by the PRC Ministry of Industry in early February. The length of the Xingyue L is 4770 mm, the width is 1895 mm, the height is 1689 mm, and the wheelbase is 2845 mm. Thus, in terms of its size, the "Chinese" is close to the restyled Hyundai Santa Fe (4785/1900/1685 mm), while the distance between the axles of the Korean model is less (2765 mm). Well, the dimensions of the Geely Xingyue coupe: 4605/1878/1643 mm, the wheelbase is 2700 mm. It is curious that in the documents of the certification body for the Xingyue L, only a five-seat version was declared. Although it is possible that the model still got a three-row salon. 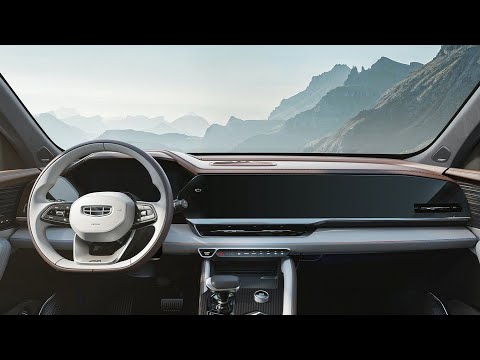 Geely released the first official images of its new crossover in January. Until today, the SUV was known under the in-house index KX11, and now the br...